Big Talent Entertainment boss Edriisa Musuuza alias Eddy Kenzo has been accused by a critic identified as Gary of gifting his manager, Martin Beta Muhumuza with a worn-out car.

Gary exposed Kenzo during an interview on Bukedde TV where he explained that for Martin Beta to enjoy the comfort of the wheels that were gifted to him by his boss, he has injected in a lot of dimes to repair it.

The claims arose after Eddy Kenzo appeared on cameras during Martin Beta Muhumuza’s wedding and gifted him with 5 acres of land, a cow, a house, and a car.

However, Gary has poked holes in them claiming that the Alphard ride that Kenzo called a Regus was grounded for a long time and has quite a mileage on it.

These things of Eddy Kenzo claiming that gave out a car is a lie. He gave Beta an Alphard that was grounded at his home in Buziga and in a very poor mechanical condition. It was branded ‘Semyekozo’ even if you ask those around him. Martin is going to fix it himself.

Gary went to sting Eddy Kenzo as he described him as a ‘car broker’ who doesn’t own a single car except the V8 he got from the president as a gift and Robert Kampala’s Range Rover that he cruises in.

Eddy Kenzo is a car broker. He does not own a single car except the Mpenkoni he got from the president. He is always changing cars. Even that Benz in the compound has a story. Why is he lying when we are fasting? Kenzo is elevating himself to a level he hasn’t reached.

Gary also claims that Kenzo does not own the Buziga house, that it belongs to some Ugandan based overseas called William, he added that the property he owns is the Big Talent studio along Salama road. 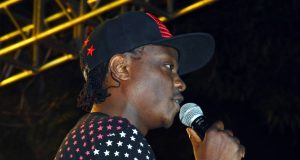 Red Banton thrown out of rental over accrued rent arrears