Dembe FM “Twezimbe” show host Isaac Daniel Katende alias Kasuku has cleared the air about the trending clip where he was seen being attacked and threatened by the self-proclaimed “Big Boys” President, born Musafiri Samuel.

While hosting his daily morning show, Kasuku noted that the video trending was just doctored reasoning that they have never hosted the guy on the “Twezimbe” show.

He further scoffed at all those who made fun of him thinking that he was silenced by the guy while live on set saying that there wish of seeing such a humiliating scenario happen to him is a dream far fetched.

The father of one advised people who make such clips to ensure that they earn from their craft because social media pays and one can make a positive living out of it.

Check out the video below. 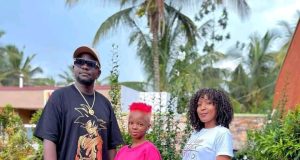 Back off my ‘Superstar’ song and stop promoting it – Khuco...