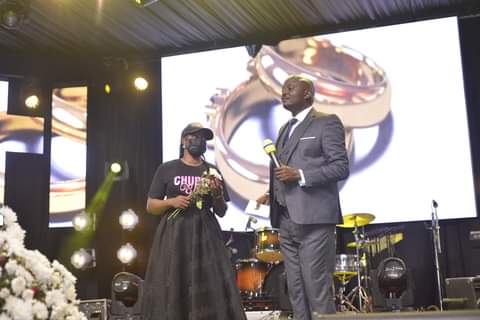 Pastor Solomon Male has publicly disclosed that Pastor Aloysius Bugingo no longer believes in the bible but only uses it to get money from his congregation.

Pastor Male made the remarks as he weighed in on Pastor Bugingo’s recent traditional marital ceremony (Kukyala) where he visited his new wife Suzan Makula’s parents’ home in Kyebando in a colorful event that had extremely tight security.

According to Pastor Male’s reasoning, explains that if Pastor Bugingo truly believes in the holy bible who would have not dumped his first wife Teddy Naluswa because the bible does not allow it.

He narrated that in faith what Pastor Bugingo did is wrong and that is why Teddy declined to sign the divorce papers because she represents the true biblical word.

He added that based on the law, Pastor Bugingo is somehow correct and all his current acts are only defended by the nation’s constitution something which indicates that he stopped believing in the bible long ago and practicing what he preaches.

For that reason, Pastor Male was not surprised with Bugingo’s acts as he was a few years back dragged to courts of law for burning bibles to ash.

If Pastor Aloysius Bugingo truly believes in the Bible, he would have not left his wife Teddy Naluswa for Suzan Makula. That is why his defense is no longer bible-based but on the nation’s constitution. Pastor Bugingo stopped believing the bible long ago. He just uses it to get money from his congregation. Lawfully, he didn’t commit any offense.

During the interview, Pastor Male called upon Christians to practice what they preach and distance themselves from Pastor Bugingo’s acts.