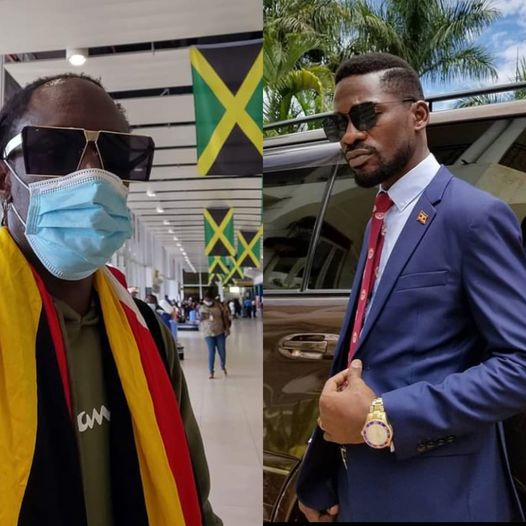 Kawundo Entertainment boss Vampino Kirya a.k.a Vampino is thankful to Bobi Wine for bailing him out of Montego bay prison in Jamaica.

This is after the singer shared a post on his social media accounts calling upon well-wishers and Ugandans to give him a ssistance after being jailed in the country he had visited to execute some deals.

Among the few concerned Ugandans, was fellow singer Bobi Wine who took time to find out where he was. Upon getting out of danger, the singer heaped praise on Bobi wine and all patriotic Ugandans who helped him acquire his freedom again.

H.E Bobi Wine thanks a lot brother…you are indeed a people person..you took time to find out where I am.

Guys I reached at a point I lost hope in a room of seven guys with piss and shit next to where I put my head..Nobody knew what’s happening and they took all my belonging..the message I sent a guard was convinced by the jailed thugs some on murder charges, rape, gun cases, theft. They told him “help di African he is innocent”…that’s when I called u all out nga mpulila am at a dead-end…

He went ahead and thanked his wife Lydia Namakula Swe, manager Kojja LuCha, and Pejay Boaz for standing strong with him.

He explained that he landed in jail because their was no direct flight to Africa so instead of putting him in a hotel, he was taken to jail. Luckily enough he is now free and a happy man.

My wife Lydia Namakula Swe and manager Kojja LuCha and Pejay Boaz thanks a lot guy. Am now being escorted on a flight out of Jamaica Montego bay. The reason I was put there is because they had no flight direct to Africa so they threw me in jail instead of a hotel. God. #vampino#bobiwine#vampinokirya I love u all am safe..good, I had finished what took me out there.”

Screenshots: Bad Black explains why she is being forced out of...