Home Entertainment We’ve been fighting Museveni but I don’t see any strategy that can...
Facebook
Twitter
WhatsApp 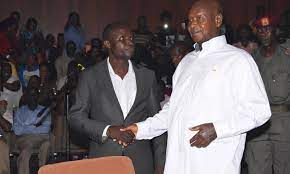 Singer Ronald Mayinja says he and other people have been fighting president Yoweri Museveni for the last 35 years but he doesn’t see any strategy that can remove him.

Besides fighting through music to see Museveni out of power, he goes to state that politically he has only held the NUP party card.

He added that the time he went to DP, he was only there as a friend to politicians who were in DP adding that he likes Nambooze and Bobi Wine very much.

Speaking about music, Ronald Mayinja stressed that the work of a musician is to only make people happy. The singer made the statements while appearing on Urban TV’s morning show.

The role of a musician is to make people happy. Secondly, I am a Ugandan. Politically, the only party card I’ve ever held is NUP. For DP, I only went there as a friend to those politicians. I like Hon Nambooze. I also like Bobi Wine. People have been fighting, including me have been fighting Museveni for 35 years but as of now, I don’t see any strategy that can remove Museveni.

23 Celebrity Tweets You Missed From The Golden Globes